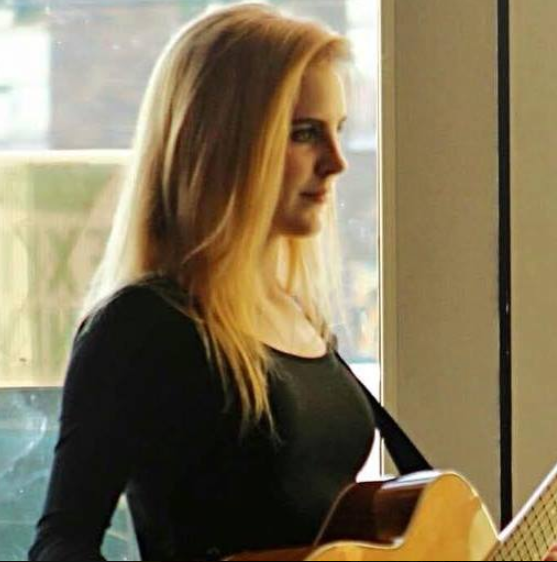 Here are a few milestones:· She is an aggressive well-established singer/songwriter with a plethora of multi-genre appeal· She is a multi-instrumentalist playing keyboard and guitar with her next sites on the mandolin· She sang for the Prime Minister of the Bahamas· Opened for Vanilla Ice· Opened for Texas Country Artist Kevin Fowler· She won “Female Vocalist of the Year” 2015 and 2016 in the East Texas ETX Annual Music Awards· She won Female Guitarist and Singer/Songwriter 2016 in the East Texas ETX Annual Music Awards· She was a semi-finalist of the popular national talent show, America`s Got Talent, season 11· She’s a co-writer with Gerald Smith and Dennis Knutson in Nashville..And to date in 2018 has traveled to Nashville with her management Castel Entertainment Group , out of LA, to write and record with some of the finest in that townHer 1st Original Recorded song, “Stronger” made it to #38 on the Texas Radio Music Charts in 2016,plus to date , she is the youngest artist to make it to the top 40 on this music chart
She has been interviewed by many, many radio stations and has actually been a guest host on ETX RocksRecently, no doubt, the youngest respected judge in 2 professional Texas singer/songwriter contests
Biography 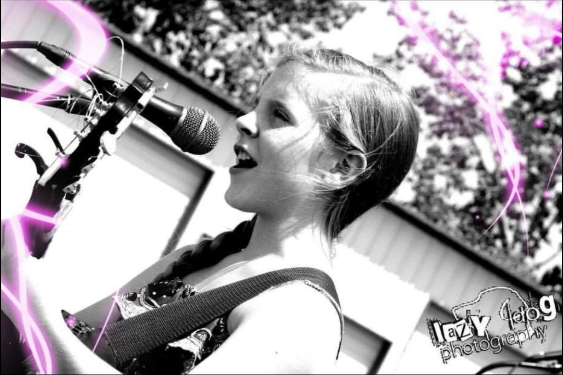 It has always been said that Texas grows things bigger than anywhere else and boy does that hold true for the big voice of Kadie Lynn. Kadie Lynn is the big voice of Texas and once you hear this beautiful young lady sing you will understand why. Kadie Lynn is only ten years old and already has a voice that can not be matched by someone twice her age. This girl will keep you in amazement and enjoying every note she sings. Kadie Lynn has the power and skill to make you cry or make you pat your feet to the beat, she is the new star of Texas and she is shinning bright. Just like the Alamo, Kadie Lynn will stand the test of time and brighten people’s lives for a very longtime to come.

Kadie Lynn took right off in her journey at the ripe old age of two. At two years of age Kadie Lynn made her debut performance at the Tolosa Baptist church. It was not long after the church that she made her first stage performance at the Hayseed Opry. Then by the age of five she had auditioned and made her way to the Rodeo City Music Hall in Mesquite. However, here more recently she performed at the Rodeo City Music Hall singing, “Angel”. This song truly shows off what her brilliant voice can do. Angel is a hard song to sing and takes a great deal of control to pull it off, which most adults cannot do correctly and yet here is Kadie Lynn at nine years old singing it beautifully. This is just outstanding, and she holds the entire audience in her hand the whole way, not a sound was made, only a true artist with true talent can do this, and wow just brilliant. 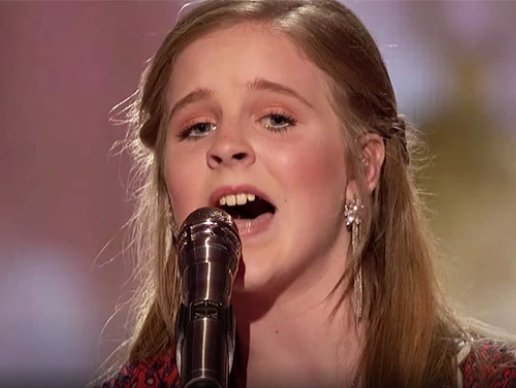 Kadie Lynn has spent a great deal of time on stage since she began, and in all of her performances the professionalism she has you would think she had been performing for thirty years. It is obvious when watching she has gained a lot of respect from those who come to listen.

In 2014 Kadie Lynn performed both at the Arlington Music Hall, and the Grapevine Opry. It is a very hard and lengthy process to get to perform here, but Kadie’s big voice pulled it off. 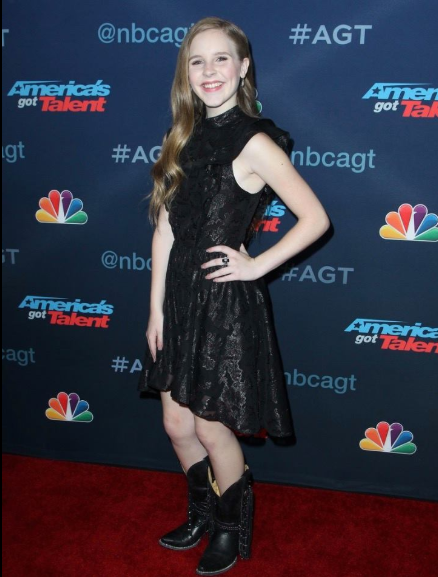 Kadie Lynn loves to perform and she does her part for charity. She has sung at many benefits, and is always willing to use her talent to help those in need. She has also performed for the Shipp Family Gospel Cruise Fest on a cruise ship and in the Bahamas. She is an annual entertainer for the SFGCF and you know she owns the place when she is on that stage. Kadie Lynn performs because she loves lifting up people’s spirits and what a better place to do that than a Gospel show.

Kadie Lynn has sure been putting a lot of smiles on people’s faces with that amazing voice of her’s, but that voice has won her several awards also. She has come in 1st place in 3 karaoke contests and two years ago she competed for the Gun Barrel City July Fest. At this contest she did not win, but was asked to come back and opened for Kevin Fowler and Vanilla Ice, and did so 2 years in a row. She also competed in a contest for Enjoy Radio where the listeners called in to vote for who they wanted to perform at a gospel concert. 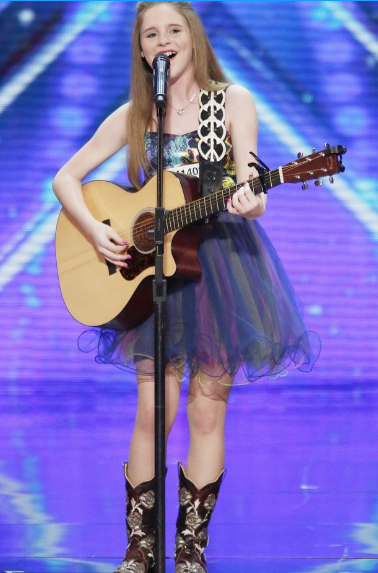 Kadie Lynn was in the top eight and got to perform at the gospel concert on stage,in Garland Texas, with some very well-known gospel artists. Kadie Lynn competed for two years in a row for the Rural American Idol where she won 1st place in her division and 2nd, 3rd overall. This won her a cash prize plus an all expense paid trip to the National Farmers Union Convention where she performs along with the other 1st place division winners.She has won Female Vocalist 2 years in a row , Guitarist , and
Singer/Songwriter at the ETX Music Awards , then came back the next year to Host the Show . Kadie Lynn ,at the age of 13 , won New Female Vocalist of the Texas Regional Radio Music Awards, and was a semifinalist in 2016 season 11 of the National TV Show America`s Got Talent in front of her biggest audience to date of 16 million

Kadie Lynn has had a great experience with being on Ci-Tv which is an Internet TV station out of Dallas. She has been on this show twice this year with an hour spot each time. She has also been on three different radio stations, The Ranch, Texas Red Hot Radio, and Texas Gospel Radio,Big Star 97 , and many more.

If Kadie Lynn were a commodity sold in the markets today, is there any doubt that you would be all in on that one by now? Probably not. Just ask “Mr Talent Finder” himself, Simon Cowell of America’s Got Talent. At the speed of light, this adopted 14-year-old, Texas home grown hick town sensation, whose parents have been all in since she was 3 years old singing every verse of “Amazing Grace” in front of their little church, has come a long, long way in a very short time. Her blastoff to stardom is nothing short of a certainty to anyone that has paid attention. Her accolades are staggering to date, for anyone at any age as an artist, much less a 14-year-old girl from Kemp, Texas! Confidence, humility, faith, kindness, relentless work ethic, and a total “Can Do” attitude, are just a few of the indisputable adjectives that can be said about Miss Kadie Lynn. Here are a few milestones:

· She sang for the Prime Minister of the Bahamas

· She was a semi-finalist of the popular national talent show, America`s Got Talent, season 11

· She’s a co-writer with Gerald Smith and Dennis Knutson in Nashville..And to date in 2018 has traveled to Nashville with her management Castel Entertainment Group , out of LA, to write and record with some of the finest in that town

· Her 1st Original Recorded song, “Stronger” made it to #38 on the Texas Radio Music Charts in 2016,plus to date , she is the youngest artist to make it to the top 40 on this music chart

· Her band, “The Foundation” is a collection of some of the best musicians in the world

· She has been interviewed by many, many radio stations and has actually been a guest host on ETX Rocks 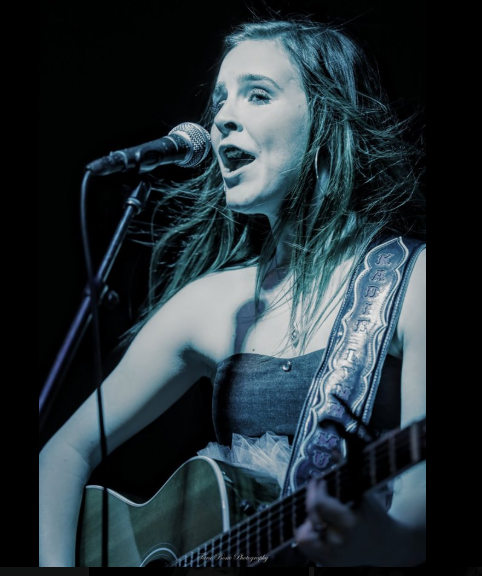 What’s next, you may be asking at this point? With Kadie Lynn, there’s one guarantee. Expect the unexpected. In an continued upward direction, she has prepared herself for the next career phase, touring with her new band, going into studio and producing incredible new music that crosses many genre’s, guest appearances, more radio tours, and much more artist development with incredible artists, writers, coaches, and mentors, several trips to Nashville writing and recording and producing her soon to be amazing original CD. 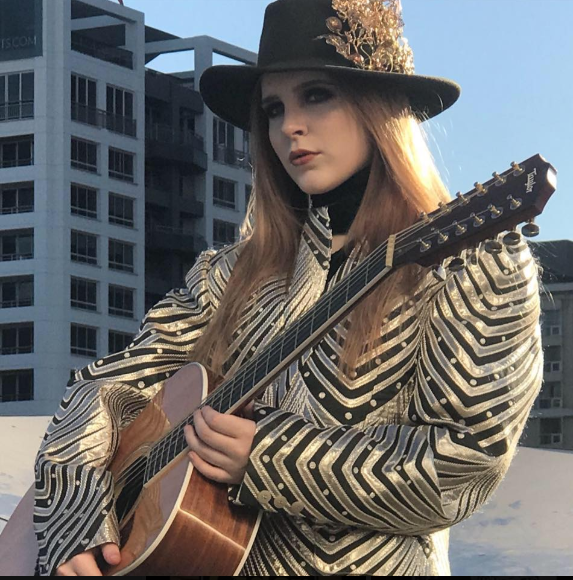 Although Kadie Lynn would not write such a resume of recognition regarding herself, she would never end such a bio without a humble thanks to all those that have had a part in her meteoric rise. So with her permission, let me say a special thanks to Angela Cade, Rayburn Turner, Robert Keller, Mike Copeland, Brad Roberson, Jayne Lybrand, Richard Hardin, her Mom and Dad , Her Family , Fans, and yours truly, Rick Richards. Her most important thank you would be to Jesus Christ, with Whom, all things are possible.

You can follow Kadie Lynn on Facebook, Twitter, Instagram, and her YouTube Channel. You can also download her music on itunes or go to her website, www.kadielynnmusic.com, for CD’s or her most popular merchandise. She enjoys signing your CD’s, T-shirts, or other items at her live performances, so check out her performance schedule. There’s more to come so stay tuned! On behalf of the entire Kadie Lynn Team, thank you!