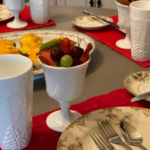 Be the picture of southern grace and etiquette when you relax on the porch of Anding House, where the nostalgia of yesteryear beckons anyone to sit a spell. Spend the perfect weekend surrounded by rustic charm and rich history. Reserve a room with us today!

The owners, Wesley and Lisa Anding, are  local of Malakoff, Texas.   They purchased the home in January 2019 as an extension of their wedding venue in the area. Lodging is limited in the area. Therefore, they added this convenience for out-of-town guests.

Today, many guests of Anding House B&B enjoy their stay as part of a larger life experience such as a wedding, graduation or anniversary at our highly acclaimed Anding Acres Wedding Venue.

A History of Anding House

Originally known as the Flagg family residence, the house was designed by H.L. Flagg in 1920 to be an easy-to-manage, comfortable abode for his six children. Mr. Flagg was the president of the First State Bank of Malakoff and the owner of Flagg Drug Store and Flagg Dry Goods and Groceries.

Metal, brick, and heavy hardwood were used to construct and ensure the longevity of the house. For more than 99 years, nothing has been added to its structure, and it remains the same as it was in the beginning.

In 1921, lignite deposits in Henderson County attracted the attention of Texas Power & Light (now TXU Energy). The company then built a plant in Trinidad while lignite beds in Malakoff were secured. The first mining operation was conducted at a strip pit north of Malakoff. This pit was used to provide lignite until the mines were developed.

A railroad was built to connect the mining operations. The rails were connected to the Cotton Belt Rail, and trains operated on the main line between Malakoff and Trinidad. The train comprised two locomotives, a caboose, and around 100 steel coal cars. As the mines became operational, train loads of lignite traveled to Trinidad each working day.