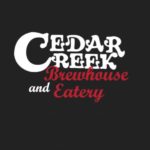 A Full-Service Restaurant, Pizzeria, and Brewery

It’s been more than two and a half years since Cedar Creek Brewery of Seven Points announced plans to join forces with the former owners of LUCK for a second location in Farmers Branch. Patience and persistence have finally paid off, as Cedar Creek Brewhouse & Eatery is now open at The Shops at Mustang Station.

Set up on the southeast corner of Bee St. and Valley View Ln., Cedar Creek Mustang Station occupies a two-story structure with an open and expansive feel. The latter is enhanced by high ceilings and a wealth of windows letting the light shine in. Amenities also include indoor and outdoor seating options on both levels, with the second-floor balcony being an especially inviting space for those looking to enjoy an “elevated” brewpub experience.

Surveying the “Eatery” aspect, Cedar Creek Mustang Station currently offers a menu of soups, salads and sharables, along with “Hands On” entrees (burgers, sandwiches) and specialty pizzas. LUCK fans should take heart as familiar favorites like Bierocks, Smoked Wings, and the Signature Pastrami Sandwich are staples on the menu.

In terms of beverages, Cedar Creek Mustang Station has a full bar to go along with barley and hop-based selections emerging from the “Brewhouse.” Beers pour from 30 taps located behind the bar, most of which are Cedar Creek originals, though a handful of guest brews are available. Plus, Cedar Creek has its own hard seltzers.

Small-batch offerings brewed in-house will fill slots on the tap wall as they are produced, in addition to the full range of popular core beers like Dankosaurus IPA.

In a move that brings together two well-known members of the North Texas craft beer industry, Cedar Creek Brewery of Seven Points and Chef-Engineered of Dallas have announced a joint venture to open Cedar Creek Brewhouse & Eatery at Mustang Station Restaurant & Retail Park in Farmers Branch.

Cedar Creek Brewery, which originally opened in 2012, has continued to expand its presence in North Texas and beyond, while Chef-Engineered’s first restaurant concept, LUCK Dallas, has also made a significant impression on both the craft beer and dining scene since its Dallas debut in 2013. With this coupling, both companies look to broaden their footprint in a growing, but competitive marketplace.

“While craft beer continues to make an impact in North Texas, and the desire for craft kitchens captures the attention away from chain restaurants, this partnership was an easy decision,” says Jim Elliot, founder of Cedar Creek Brewery.

Cedar Creek Brewhouse & Eatery will combine an award-winning brewery with a from-scratch American regional comfort food kitchen. The idea takes the simple craft brewery one step further with the addition of a full-service restaurant that pairs each meal with a hand-crafted beer.