Going to the dentist shouldn't be scary!

RELY ON A PEDIATRIC DENTIST IN GUN BARREL CITY, TX

A dentist appointment doesn’t have to be a scary experience for your kids. Children’s Dental Depot is a pediatric dentist in Gun Barrel City, TX with a fun and welcoming office. Our goal is to give children, including special needs children, clean and healthy teeth while helping them feel confident throughout their appointment.

CHOOSE A SUPER DENTIST FOR YOUR CHILDREN

Give your kids a fun and positive experience with the dentist. Schedule an appointment at our family dentistry office today.

Dr. Nanni Baker earned her B.A. in 1986 from Colorado State University in German Language. After graduation she taught German for the Department of Defense schools in Wiesbaden, Germany. From 1988 – 1991, she attended the University of the Pacific School of Dentistry in San Francisco, graduating with a D.D.S.. In addition, she received a Health Profession Scholarship which enabled her to serve in the United States Army Dental Corps as a Captain from 1991 to 1994. She is very proud to have served her country.

Following her tour in Wurzburg Germany, she completed her certificate of Pediatric Dentistry at the University of Texas Health Science Center in San Antonio in 1996.

In September of 1996 Dr Baker began working regularly in El Paso as well as opening her private practice in Boerne Texas. Dr Baker and Dr Maldonado have been working together in El Paso since 2003 and together opened The Dental Ark in November of 2008.

Dr Baker and her husband Bo enjoy ranching and raising both horses and brahman cattle. Dr Baker’s passion is riding dressage on her mares Bettina and Bonita both of which she bred! She is also a member of the United States Dressage Federation and the United States Equestrian Federation. When she is not at the office you’ll be able to find her at the barn or spending time with her children and grandchildren. Her faith and family are what Dr Baker is most proud of.

Dr. Nicole Loughlin earned her Bachelors degree from Cornell and Texas Tech University. Dr. Loughlin attended both campuses on tennis scholarships. She earned her Bachelors degree in biology and chemistry in 1999. From 1999 to 2003 she attended the University of Texas Health Science Center School of Dentistry in San Antonio and received her D.D.S. She achieved numerous awards for both clinical and academic excellence as well as completing an externship in pediatric dentistry at Baylor University. Dr. Loughlin practiced in her home town of Lubbock, as well as Tucson, AZ before joining our team at little smiles Dentistry for Children. Dr. Loughlin’s husband is also a graduate of UTHSCSA Dental School. He is now in private practice as a prosthodontist in San Antonio. When not at the office, Dr. Loughlin enjoys gardening and mountain biking. She also loves hiking with her beautiful Golden Retrievers, Sierra and Sadie. Dr. Loughlin is a member of the American Academy of Pediatric Dentistry. 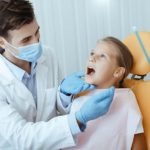