IT ALL BEGAN … in the 1850′s when the circuit judge stopped in Canton on the FIRST MONDAY of each month. This was the day the Judge held court. People from the area came to town on that day to conduct their business, stock their pantries and sit in on court proceedings … and watch a few “hangings”. History relates one incident where a man was hung for stealing his partner’s wagon of goods for trading. He is buried facing south (not east) in Hillcrest Cemetery by the First Monday grounds.

​Quite naturally, many also brought their own goods, produce and livestock with them to sell or trade. This took place just off the west side of the courthouse square. Most history versions include the trading of wild hosrses, which were rounded up in the region and brought to Canton to sell.

​By 1965, FIRST MONDAY had outgrown the Town Square, It was then that the City of Canton purchased six acres just two blocks north of the courthouse. FIRST MONDAY was moved off the square.

​Originally, FIRST MONDAY only “happened” on the first Monday of each month. However, if you take a look NOW at the calendar, you will note that Monday has been excluded.

​Even though the event goes from Thursday – Sunday, the name is now and will forever be known as: FIRST MONDAY TRADE DAYS. 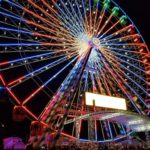